Dementia vs. Delirium: Understanding the Difference

When it comes to providing the right care for a parent or family member, it’s important to know that cognitive changes in your parents require the same amount of care and attention as physical conditions and illnesses.

Dementia and delirium are both mental states that can severely affect a person’s ability to reason, communicate, or perform basic tasks. Because of the similarities of the two states, delirium can often go undiagnosed and untreated.

However, some distinct differences distinguish the two. In order to best support your loved one living with memory impairment, it’s important to familiarize yourself with the differences between dementia and delirium so that they can be easily identified and treated.

Brickmont Assisted Living, with memory care services throughout Georgia, encourages caregivers to learn more about dementia and delirium to better understand the differences.

Dementia is a broad term that encompasses the symptoms associated with cognitive decline—including forgetfulness, loss of reasoning, and limited social skills. Dementia is most commonly caused by progressive brain cell degeneration, although some forms can be brought on by a stroke, brain tumor, or disease.

Since dementia is brought on by anatomical changes in the brain, it is usually slower to manifest and is likely irreversible.

While dementia is a slower onset; delirium is a sudden change in a person’s mental function and affects the ability to think clearly, pay attention, sleep, and more. Delirium occurs when the normal sending and receiving signals in the brain are impaired. This can happen for a number of reasons, including:

Unlike dementia, the underlying cause of delirium is not necessarily a severe brain condition and can sometimes be caused by external factors. Knowing the major causes of both dementia and delirium will allow you to better differentiate the two conditions.

Dementia typically progresses in stages, each one exhibiting various and worsening symptoms over time. In the early stages, symptoms of dementia can include:

As the condition progresses, the symptoms can worsen and include:

While some of the symptoms seem the same, delirium manifests in slightly different yet crucial ways from dementia. Though situations vary, a significant difference to note is that delirium is often abrupt and acute in onset. Other signs of delirium include:

Since dementia is a degenerative disease, there is currently no cure. However, with the right care and environment, those living with dementia can live healthy and fulfilling lives.

Specialized memory and dementia care communities are a great option for your parent or loved one with dementia. Dementia care communities provide a safe and secure environment for members to socialize and engage in stimulating activities. Research has indicated that participating in socializing and mentally stimulating activities can help slow down the progression of dementia.

In the right environment, episodes of delirium can be prevented. Moving your loved one into a dementia care community can provide them with a comfortable, familiar environment. These communities are also equipped with medical attention and resources should an episode of delirium occur.

While dementia and delirium exhibit many of the same components, it’s important to know and understand the differences. By recognizing the risk factors, causes, and symptoms, you can ensure that your parent can get the best treatment or care possible.

At Brickmont Assisted Living, our Silver Linings Memory Care Program offers memory care throughout Georgia. Our Silver Linings Program provides a comfortable and intimate environment that can help in managing dementia and preventing delirium. We are committed to providing the highest quality of life for our residents through our programs and features.

If you are interested in learning more about our Silver Linings Program, we encourage you to contact a member of our team today! 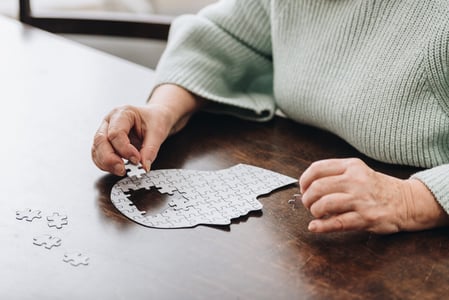